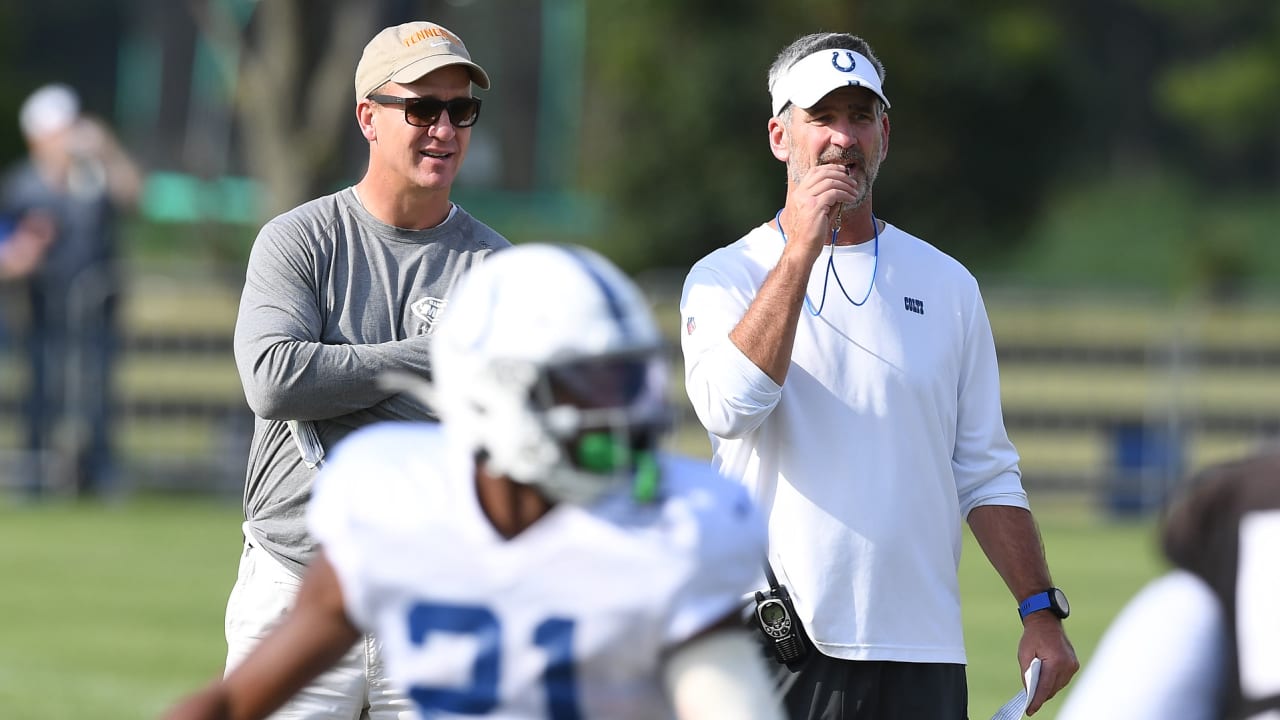 INDIANAPOLIS — The best football players never feel as if their work is done. There’s always something that can be accomplished — something they can be coached on — that can make them even better at their craft.

These are the types of players sought out by the Indianapolis Colts each and every year. From undrafted free agents to draft picks to veteran free agents, coachability is a trait coveted by general manager Chris Ballard and head coach Frank Reich, and plays right into the team’s mantra of getting “one percent better every day.”

When legendary quarterback Peyton Manning stopped by the Colts’ training camp headquarters at Grand Park Sports Campus in Westfield, Ind., earlier this week, Reich, of course, wanted to throw some Xs and Os at the future Hall of Famer. But after Manning met with Indy’s offensive and defensive coaches, Reich was glad that this theme of coachability was what really resonated.

“He just reminded (our) coaches that, ‘Hey, your job is to coach these players hard; push them past where they think they can go. Always be challenging them, always help them get better,’” Reich told Colts.com. “That’s really just a reminder: here’s a guy who was an all-time great, and he was telling our coaching staff how all through his career, even late in his career, he wanted to be coached, he wanted to be reminded of the basic things — things he knew like the back of his hand — but he just always wanted to be reminded to continue to get better.”

Manning took advantage of every minute he had on his trip to Westfield.

He arrived in Indy late Wednesday night, but he watched film and chatted with the Colts’ coaches at the Grand Park Events Center until about 1 a.m. Thursday morning. After getting some shuteye, Manning returned to address the entire team before having more focused conversations with both the offensive and defensive staffs.

Manning then joined about 30 Colts alums at Thursday’s final camp practice of the year, as the team scrimmaged for a second day against the Cleveland Browns. No. 18 was seen chatting it up with all kinds of old friends and Colts connections, and he also got a bird’s eye view of the Indy offense as it worked against the Cleveland defense, hearing the playcalls from Reich and talking with quarterbacks Andrew Luck and Jacoby Brissett, among others.

Reich and Manning, of course, go back. Reich’s first dive into coaching was as an intern on Tony Dungy’s staff with the Colts starting in 2006 — the year the Colts, led by Manning, won Super Bowl XLI — and then he started moving up the coaching ladder, eventually taking on a role as Manning’s quarterbacks coach in 2009 and 2010.

But now back in Indy as the Colts’ head coach, Reich really appreciates the opportunity to tap into that relationship to help the team as it prepares for the start of the regular season.

“Peyton, the contribution he just made over the couple days he was here was tremendous,” Reich said. “Just very valuable. There’s a lot of good insight from Peyton.”

For his part, Manning said he enjoyed the opportunity to, in a way, get back to his football roots.

“They had different questions,” Manning said of his trip to Colts camp. “Frank had talked about some questions that we wanted to discuss, some topics with the offensive staff and defensive staff; what things you liked, what things you didn’t like. So just kind of good football talk, which I don’t know how much I said that they didn’t already know, but it’s fun for me to kind of get a football fix and talk some ball, and tell some stories and watch some film. So I’ve really enjoyed it. I appreciate Frank and Jim (Irsay) bringing me in, and if I helped out a little bit, even better.”