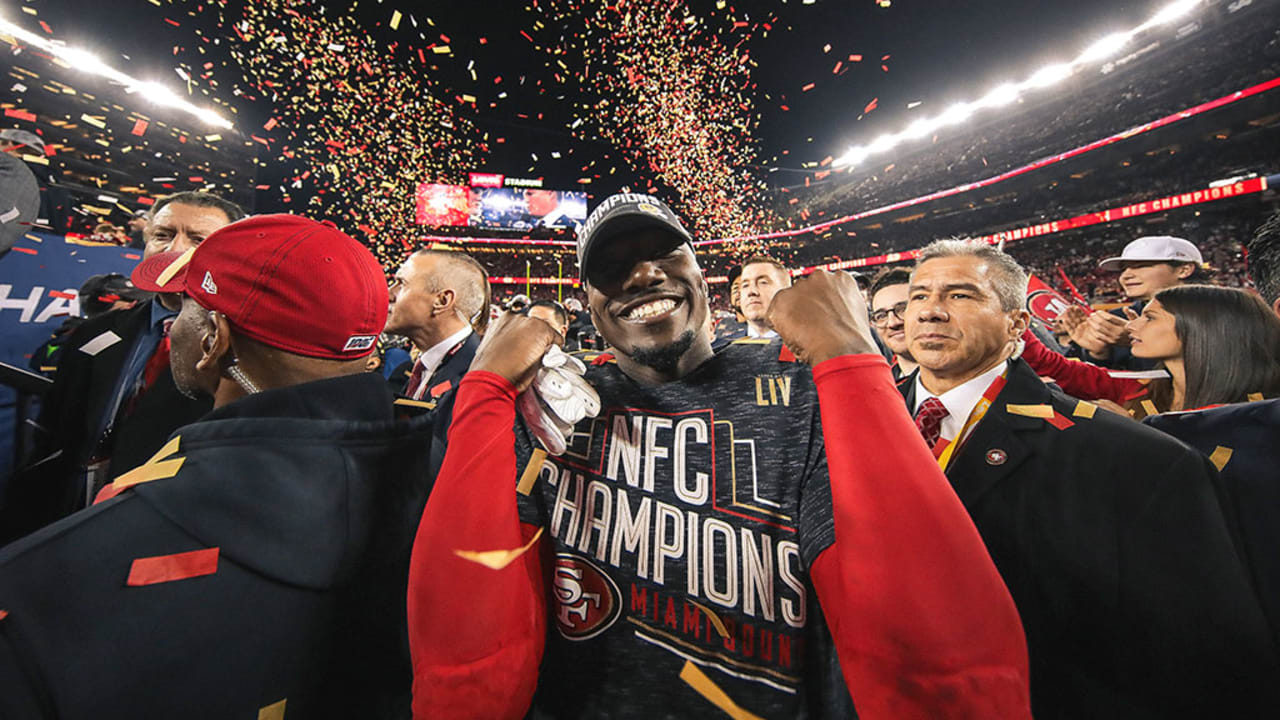 DL Arik Armstead on going to the Super Bowl:

“It is amazing. It means a lot to us, especially going through all of the adversity that we went through over the past couple of years. To be going to the Super Bowl and have the chance to be the top of the league is amazing.”

“You have to bring some exotic pressures on him. They have a really good O-line in pass protection so you have to do a couple things to mix it up. I am glad that we got that lead in the first half because (Green Bay Packers QB) Aaron Rodgers is dangerous. I am just happy to be moving on.”

“I don’t think that it has hit me yet. I’m going to see my family and I’m sure it will hit me then. I am going home so I am excited.”

“I think you go back to OTAs, man. We all knew we could be a special group, a special team this year. And just seeing the guys work, work through a lot of things from OTAs, to training camp and preseason. The guys just fed off of each other, you know what I mean? Offense, defense, special teams, everybody. We’ve got a lot of selfless guys playing for each other. That’s the key ingredient. Being able to play for your brother next to you, no matter what happens. Doesn’t matter who gets the stats or anything. We’re just trying to go out there and win football games and I think we have a really special group.”

Buckner on going to his first Super Bowl:

“Yeah, it means a lot, you know what I mean? It’s a slim amount of us that’s been here since my rookie year, but obviously you see the new coaching staff, they trusted us in our abilities moving forward. And just to see the team that they brought together, we knew it wasn’t going to be overnight, it was going to take time. And we had a lot of injuries the past couple of years that set us back. And just to see the grit in the team even when we were losing, guys came out every day ready to work. Nobody was pointing fingers. That’s when I knew we had a lot of special guys in the room. Nobody’s pointing fingers, blaming each other for anything. Everybody was owning up and trying to see what they could do to help the team get better. You could see it over the course of this season, guys stepping up. Guys getting benched and not complaining about it, just trying to see what they can do to help the team. You could see it throughout the entire course of the season. It’s been unbelievable.”

DL Dee Ford on the defense’s success in generating pressure against the Packers:

“Stay focused. Do what we got to do. It is very simple if we play together we dominate. We took that same mentality and we didn’t need to do anything different.”

Ford on facing his old team, the Kansas City Chiefs, in the Super Bowl:

LB Dre Greenlaw on what this season has meant to him:

“Once I got the opportunity, I just made it last, made it happen. It is just a testament to the guys in the fifth round that they can go out here and work and that they can get it done too. Just because you get drafted in the fifth round, undrafted or first round, it doesn’t matter. If you get an opportunity, give it all that you got and put it on the line. Your preparation takes care of everything. If you go out there and prepare and give it your all, good things will come for those that work hard.”

TE George Kittle on going to the Super Bowl:

“Obviously, it hasn’t hit me yet. I’m pretty excited. I think tonight’s going to be pretty fun. But, I’m just so happy. I mean ever since my rookie year, just the hard work, (49ers head) coach (Kyle) Shanahan, just the three years of every single day. He always talks to us about how we’re this close, just have to get over it. It all finally came to. And this whole season, ups and downs, we had injuries left and right. We had guys step up when they needed to from (OL Justin) Skule to (OL Daniel) Brunskill, to our defense, (S) Marcell (Harris), (LB Dre) Greenlaw. We had guys everywhere stepping up the entire season. And, when we get to finish it on something like that where, I don’t know, how many rushes did we have?”

T Mike McGlinchey on the atmosphere at Levi’s® Stadium:

“It was incredible. The faithful have been showing up all year. They have proven once we put something good in front of them, they are some of the best fans in the NFL. We have felt it really, really strong the last five or six home games. Today was even more so. It was incredible from start to finish. I don’t think there was an empty seat in the house, even when we were having our awards ceremony, which says a lot.”

RB Raheem Mostert on how he’s feeling after winning the NFC:

“Still surreal. You know, I just — I can’t believe that I’m in this position right now and I did the things that I did tonight. And I would like to thank God first and foremost for blessing not only myself but everybody in the organization to be in the position that we’re in, to get the win and to move on to Miami, my home state. And I can’t believe it. I’m still being able to play at my home state. This is so surreal right now.”

Mostert on what pops into his head after his record-breaking performance in the NFC Championship:

“You know, I did have a lot of doubters and naysayers, and now I get to actually tell them, ‘Look at where I’m at now.’ I never gave up on my dream. I never gave up on the opportunities when it presented itself. And I always worked hard, no matter what. And it’s crazy that I’ve been on seven different teams. I actually still have the cut dates. And I look at that before every game. I look at the cut dates when I got cut. I’ve been on, like I said, seven different teams. The journey’s been crazy. Not even — not everybody can deal with that type of stress and pain and agony that I went through. But like I said, I kept the faith in not only myself but whoever gave me the opportunity. And this organization has done a great job with that.

“Truthfully for you to even say that now is like — I’m still shocked. I can’t believe that. Eric Dickerson is the ultimate running back. He’s a guy I look up to, even all the other running backs, even with (former 49ers RB) Frank Gore, to even be mentioned with somebody like (Hall of Fame RB) Eric Dickerson, that’s unbelievable.”

“Man, it was crazy. It seemed like every run he did, he was about to score every time. I was just out there going crazy. It was an amazing feeling.”

WR Emmanuel Sanders on how the team won with just eight passing attempts:

“Yes, I only had one target, and I’m not upset with that. I told myself, if I’m not going to get the ball, I might as well go out here and be a bully. I kind of turned into a bully, I started to enjoy blocking. Sometimes I actually like that aspect of it. When they brought me over here, they knew what is in my heart. They know I am going to be an incredible teammate and I am going to do whatever I have to do to help this team win. If it is going in and blocking, and if it is playing special teams, whatever I’ve got to do, I am here to help.”

“They ran a corner post. We were in quarters. I just kept running. I knew it wasn’t necessarily my responsibility, but I knew he was going to take the shot there and go for the gusto. Just wanted to track the ball down, give us a chance. I was tracking. I thought it was kind of out of my reach for a while. I was going to go for the bat down. And, as I got my feet under me, I noticed I could get under it and I was able to do it.”

Sherman on what makes this team so special:

“It’s a long road and there’s a lot of work that goes into it. A lot of things that you don’t see, a lot of unspoken things, a lot of work away from the cameras. You guys see the games. You don’t see the hours and hours of work. The hours and hours of study. The hours and hours of treatment, pain, overcoming pain. The nights at home you don’t even get to spend with your kids because you’re trying to get your knee back or hamstring back or your back. And your kids sitting there rubbing on you trying to make you feel better. People don’t understand the sacrifice that goes into being great at this game. They see the games and they’re like, ‘they won or lost,’ but regardless, guys sacrifice. Those guys in Green Bay, they put a lot of sacrifice into it throughout the season. They deserve to be there. They earned their right to be there. And no matter what, win, lose, draw, you sacrifice. You give up your body and your time and your health and your mind. You’re usually somewhere between going psychotic and you’re locked in, you know what I mean? Because, it’s such a crazy edge you’ve got to be on. That’s why it’s a little emotional. You get to appreciate it a little more.”

T Joe Staley on the uniqueness of the 49ers locker room:

“This is like everybody coming to work. The attitude that everybody has every single day. There are no egos. Everybody generally pulls for each other. No one cares about what credit that they get. (49ers QB) Jimmy (Garoppolo) doesn’t care if he throws for 300 yards or, what did he pass today for, 50-60? He doesn’t care and same with the running backs. (49ers TE George) Kittle is a superstar and he could care less about his stats. Top to bottom everybody just wants to pull for each other and win. It is just a special bunch.”

Staley on the growth of the 49ers:

“We are a team that can win any kind of way. We have proven that throughout the season. We have had a game where we had to score 48 points to win on the road in New Orleans against a really good New Orleans Saints team. We had a game where we had 47 and 42 rushes in the playoffs. We can do anything and our defense is smothering. We play really great team football. Our special teams have been playing solid all year. This is a really hard team to play against and hard to beat.”

LB Fred Warner on the feeling of winning the NFC:

“It’s still kind of surreal. I mean the stuff this team’s gone through, this organization, it’s special. This is the pinnacle of football right here. And for me to experience this as early in my career as I’m going to be, it’s a loss for words.”