ASHBURN, Va. — It’s not the first time Washington Redskins coach Jay Gruden has entered a season on the hot seat and, if he’s here next year with anything short of a long playoff run in 2019, it won’t be the last.

But this time, it could be real: The Redskins haven’t made the playoffs since 2015, when they lost in their only postseason game. They’re 31-32-1 the past four years after a 4-12 mark in Gruden’s first season. His contract expires after the 2020 season.

Clay: My draft board | 13 breakouts

“Had it my first year, probably,” Gruden said, maybe only half-joking, of the speculation. “That’s just the way it is. That’s what happens when you sign on the dotted line. All you care about is that season and then after the season you have a chance to talk about contracts and where you’re at with job security. But you can’t worry about that.”

As the Redskins prepare for Sunday’s opener at Philadelphia (1 p.m. ET, Fox), all Gruden can do is focus on what he can control. The hard part? He enters the season with his fourth starting quarterback (Case Keenum) in six years and a receiving corps that has one player with more than three career games played, and with seven-time Pro Bowl tackle Trent Williams still holding out.

It’s not ideal, even if paired with a defense that could crack the top 10.

“I’m very excited about 2019,” Gruden said. “Anytime I’ve been a coach or a player, all I care about is the year I’m in. Everything else will take care of itself. We’re focused on Philadelphia. What happens after the season I’ll worry about then, but right now I feel confident we can line up with the defense we have and compete and win every game we play.”

And he’s confident in what the offense can do under Keenum, who is with his third team in three seasons. They still have tight end Jordan Reed, who looked good all summer until suffering a concussion. They still have third-down back Chris Thompson, who said he never felt healthy in 2018 and it showed in his play. He had only one catch of more than 20 yards last season. In 2017, before breaking his leg in Week 11, he had 10 such gains.

“If we can be diverse in what we’re doing, be balanced,” Gruden said, “stay away from holding calls and the negative plays … if we can do that on offense, we have a chance to be really, really good.”

They do have a healthy Derrius Guice at running back, and his ability to help in the run or pass game should enable them to be less predictable.

To celebrate 100 years of pro football, Peyton Manning travels the country to see the people and places that made the NFL the NFL.
Watch on ESPN+ » More »

“I see great skill set from our tight ends and backs,” he said. “They can carry the ball and they can catch it out of the backfield. Our tight ends are versatile in what they can do and where they can line up.”

Then there are the receivers. Washington has three rookies, including one who was undrafted, among its six wideouts. Starting slot receiver Trey Quinn, in his second year, has nine catches in three career games. Paul Richardson, with 115 career receptions, is the most experienced player. But Gruden sees positives. They have speed (Richardson, rookie Terry McLaurin and undrafted Steven Sims Jr.,) and size (four of the six are at least 6 feet tall and 200 pounds).

“When you have tiny guys out there and you want to be physical and run the ball and someone has to come in and block Malcolm Jenkins or a Landon Collins, I mean, come on,” Gruden said. “Now we have the physicality to where we can do that and match a bigger receiver with a safety, maybe block him on an end from time to time. There’s a lot of things we can do in the run game that will help with the bigger guys we have. We have versatility with what we can do.”

Gruden had hoped they found a quarterback for the foreseeable future last offseason in Alex Smith. But he broke his leg in Week 11 and remained on crutches as of this week. That forced the Redskins to again start over at the position; they traded for Keenum and drafted Dwayne Haskins. They don’t feel the latter is ready so the former gets the start.

Two years ago Keenum helped Minnesota reach the postseason and left for Denver, where he was ousted after one season. Kirk Cousins, now in Minnesota, started three years with Gruden; no one other quarterback has started more than one.

“It’s a process that people don’t understand how difficult it is to get a new guy ready to play, no matter how many games he’s played,” Gruden said. “It’s getting used to him, him getting used to the receivers, tight end, the line, cadence, terminology, protection, audibles. It’s a lot of work for a quarterback and it takes some time.

“It does get a little frustrating because there are plays we’ve seen for six years [that] they’ve only seen for six months. It’s like, ‘How do you not know this?’ It’s like, ‘Well, s— I don’t remember that play.’ It’s a matter of repetition. Case has picked it up very well.” 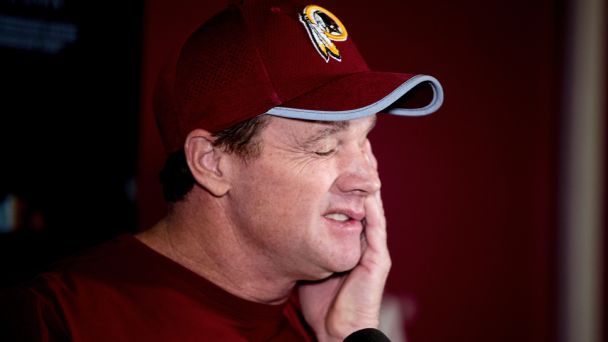 Redskins president Bruce Allen declined to comment on Gruden’s job security entering the season. Gruden’s demeanor has largely remained the same; he’s still self-deprecating, though there’s less humor during his news conferences. On the field during training camp, Gruden at times chastised his group more — he made the lines run extra sprints for their behavior in one practice.

“He’s been the same for the most part,” said Thompson, who is entering his sixth season. “We can feel more how bad he wants this, how bad he wants to win year in and year out. I’m sure it sucks to hear every year that your job is on the line. … That’s one reason why I try to go out and play as hard as I can for him. He’s a great coach; he’s a great human being. He deserves to be that head coach that changes this program around.”

Long-snapper Nick Sundberg, entering his 10th season, said he hasn’t seen a change in Gruden, either.

“He’s trying to do his best to get the best out of every one of us,” Sundberg said. “Not to say he hasn’t done that in the past, but maybe he’s holding himself to a different standard in the way he holds us to a different standard. It’s not necessarily different. But when we have team meetings there is more accountability on guys.'”

Gruden said he does not feel a different sense of urgency.

“Not really, no,” he said. “Everybody has a great desire to win every year that I’ve been here. Some things get blown up here and that we’re dysfunctional … but we’re all focused on our job. We have to get players ready to go and they have to buy in and perform on Sundays. That’s what it’s all about every year.”