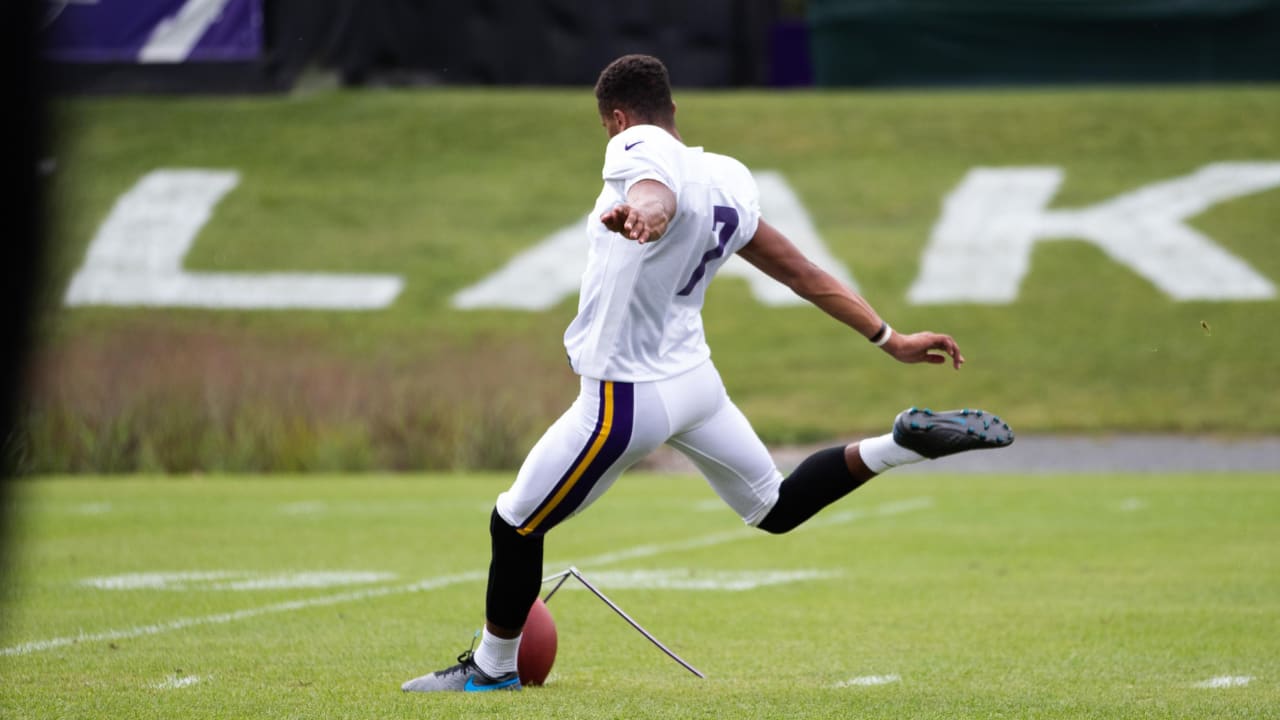 “Not sure yet. It’s the first day I’ve seen him, and I didn’t see him do anything today since he was on a different field. Can you give me a week?” Zimmer quipped when asked what position Vedvik will play. “The general plan is to look at him this week and then make a decision whether we look at him for another week, or we decide what to do.

“He got here [Sunday] night at 7:30 p.m.,” Zimmer added. “I met him, came out here to practice, and he was on a different field. It’s really hard to make a decision today.”

Zimmer did reveal he had done some research about Vedvik from his days in Baltimore when he chatted with former Ravens Special Teams Coordinator Jerry Rosburg, who retired in March and had been with Baltimore since 2008.

“I called Jerry Rosburg when there was a possibility this might happen because I wanted to find out about this kid,” Zimmer said. “Jerry Rosburg was the special teams coach in Baltimore, right? Good friend of mine.

“I asked him, ‘What is he? Is he a kicker? A punter? Kickoff guy?’ He just said, ‘He’s an NFL talent,’ ” Zimmer added. “So that’s kind of where it went from there. I still don’t know what he is, and I definitely won’t know today.”

The fact that Vedvik is on an NFL roster, and could end up playing in the regular season, is a feat in itself considering his background.

A native of Stavanger, Norway, Vedvik grew up playing soccer, hockey and track in his home country. But he became engrossed by American football when he watched the Super Bowl for the first time on television.

“I remember watching and thinking, ‘Wow, that looks amazing.’ Growing up, I was super passionate about sports and being active,” Vedvik said. “I just loved to compete and had a passion for it. I played soccer growing up mainly, and I played soccer and did hockey at some point. [Football was] a sport I’d love to try.”

Vedvik got his chance during his second year of high school, a time when the Norwegian school system pays for a year abroad in another country. The teenager moved to McPherson, Kansas, a town of roughly 13,000 people about an hour north of Wichita.

Because of his soccer background, coaches convinced Vedvik to be the team’s kicker. According to McPherson’s stats, he made all 28 extra points and hit his only field goal attempt, a 20-yard try. He also punted and handled kickoff duties.

Although Vedvik was new to the sport, he attracted attention at kicking camps around the country. That led to a collegiate career at Marshall University, where Hall of Fame wide receiver Randy Moss played.

“Throughout the games in Kansas, they said I had a chance to play at a higher level,” Vedvik said. “At that point, after a couple conversations with [my host father], I made the choice to actually pursue it and actually play the sport and get a good education out of it.

“I attended several different kicking camps and tried to compete and beat out whoever the best guys were,” Vedvik added. “Throughout those efforts, that’s where Marshall University came in and they were interested and brought me in for an official visit.”

Vedvik redshirted in 2013 and played in one game the next two seasons. But he recorded 129 total punts as a junior and senior and hit 10 of 16 field goals in 2017 as a senior.

Once again, Vedvik was pulling double duty on special teams.

“My senior year, the starting field goal kicker on the team got injured, so the coach asked me if I could kick field goals,” Vedvik said. “Throughout the years, I’ve always been doing both in practice and always had fun doing everything. Just working at it. I said, ‘Yeah, sure.’

That led him to Baltimore, where he signed as an undrafted free agent in the spring of 2018.

Tags: he him vedvik