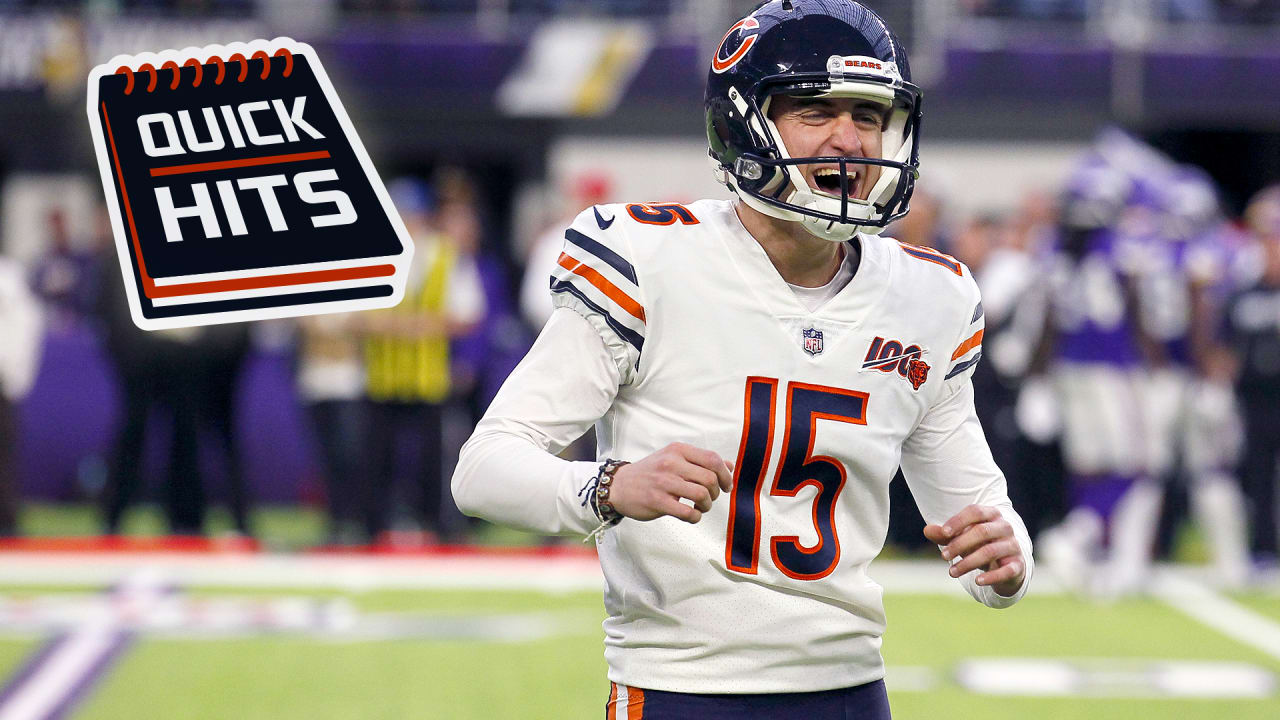 “The slumps are natural,” said coach Matt Nagy. “Making sure that we don’t panic when you go through that slump is the most important part.”

After releasing Cody Parkey following last season, finding a reliable kicker was a major priority. Given how Pineiro performed in 2019, it appears that the Bears have found their man. Pineiro made 23-of-28 field-goal attempts this season, an 82.1 percent success rate.

“That was a huge, huge, big void that we had going into this year,” Nagy said. “I feel pretty good that that void is filled.”

Impressive numbers: After catching nine passes for a game-high 71 yards Sunday, Allen Robinson finished the season with a team-leading and career-high 98 receptions for 1,147 yards and seven touchdowns.

In the process, Robinson became the third receiver in Bears history with at least 95 catches and 1,100 yards in a season. Marty Booker was the first to do it in 2002, while Brandon Marshall accomplished the feat twice in 2012 and 2013.

“From the beginning [of the season], he was the constant,” Nagy said of Robinson. “He was always the same every game. You could rely on him on big catches, wherever that was—red zone, third down, end of game, two-minute.

“But the beauty for me and the appreciation I have as a coach is just the way … I can’t emphasize enough how great it is in the fact how he handles himself away from game day. And these wide receivers that we have, just for them to understand the importance of having a guy like him to see how to do it every day. And so when you transfer it to the field, as a play-caller and as a coach, goes a long way, means a lot. And I’m appreciative of that.”

Nagy improved to 4-0 against the Vikings and 9-3 versus NFC North opponents after the Bears went 3-15 against division rivals in the three seasons before he arrived.

Stepping up: After receivers Cordarrelle Patterson (concussion) and Anthony Miller (shoulder) exited in the first half with injuries, rookie receiver Riley Ridley helped pick up the slack with three receptions for 54 yards.

The fourth-round draft pick had entered the contest with just three catches for 15 yards in four games this season.

Ridley’s 32-yard reception on fourth-and-nine from the Bears’ 49 late in the fourth quarter set up Pineiro’s game-winning field goal.

News & notes: The Bears improved to 5-1 this season when winning the turnover battle. They were 2-4 with a negative ratio and 1-3 when it was even … Ryan Nall gained seven yards on his first NFL carry and finished the game with eight yards on two attempts … Tarik Cohen’s 19-yard run was his longest of the season … Pat O’Donnell set a Bears single-season net punting record with an average of 40.7 yards, eclipsing Adam Podlesh’s mark of 40.4 set in 2011.