FOXBOROUGH, Mass. — Quick-hit thoughts and notes around the New England Patriots and NFL:

That was the theme around parts of the team this week following word that Gordon has officially filed for reinstatement. He was suspended Dec. 20 for violating the terms of his reinstatement under the league’s substance abuse policy, missing the Patriots’ final two regular-season games and all three playoff games. His filing means commissioner Roger Goodell will now review his status and has the sole discretion over the timing and any decision.

“It definitely would mean a lot to him, because I know it means a lot to him to just play football,” receiver Phillip Dorsett said. “I was definitely close to him. I just hope he gets himself right. That’s my main concern — just him as a human being. I don’t really care about the football thing. I just want to see him be healthy in his mind, his body and spirit.”

Gordon wore No. 10 last season in New England, and after he gave it to first-round pick N’Keal Harry for Thursday’s preseason opener against the Lions, Harry eventually ended up in No. 8. Some might view that as a gesture to let Gordon know his old number is waiting for him should he be reinstated.

“I’d be happy for him,” said veteran cornerback Jason McCourty, who was Gordon’s teammate in both Cleveland and New England. “I think at this point, everybody here, you’re just encouraging and you just hope everything is working right with him — not only with reinstatement but just in life, that he’s doing well, progressing the way he needs to progress. If the next step in that progression is coming back to the team, obviously everyone here would be thrilled to have him. He’s an awesome person, dealing with things just like the rest of us.”

Dorsett also had a message to relay to Gordon.

“I just want to let him know we’re all thinking about him, and we want his best interests moving forward,” he said.

2. A final word on Brady’s contract: The timing of finalizing Tom Brady‘s contract that gives him an $8 million raise but makes him a free agent after the season, and reports that he and wife Gisele Bundchen are putting their Massachusetts home up for sale, sparked media-based speculation on whether it could lead Brady to play somewhere else for 2020. I view the two things independently. However, the new contract does put the leverage on Brady’s side, which is notable, because the Patriots seldom give away leverage like they did in agreeing not to place the franchise tag on Brady. So if Brady wants to go, or at least explore the possibility, he can make that happen. My view is both sides have built up a trust over the past 20 years, and I believe they see the power of that trust/relationship ultimately leading them to a place that works for everyone. So they’ll keep talking about an extension and see where it leads them.

3. Five quick facts on Meyers: Undrafted-free-agent receiver Jakobi Meyers likely played himself onto the initial 53-man roster with his strong start to training camp and stellar performance in the preseason opener (six catches, 69 yards, two TDs). Here are five things to know about him:

4. Free parking at Gillette: One of the challenges of the Patriots’ setup at Gillette Stadium is having just one road — Route 1 — that leads to it. So anything to reduce congestion/traffic is welcome, and team president Jonathan Kraft came up with a unique idea last year that will continue in a more official capacity in 2019: a free parking program.

To celebrate 100 years of pro football, Peyton Manning travels the country to see the people and places that made the NFL the NFL.
Watch on ESPN+ » More »

“We tried Jonathan’s idea last year and found that it was well received and sustainable. People who took advantage of it loved it as an option,” chief operating officer Jim Nolan said. “I know we’re the only NFL facility to offer free parking.”

Meanwhile, the cost of parking in the lots on the Gillette Stadium side will increase this year — from $40 to $60. Fans also have the option to prepay for parking on the Gillette Stadium side and will receive a 10% discount if they sign up for a season-long parking pass ($504 for all 10 games). The prepaid parking on the stadium side of Route 1 guarantees the ticket holder access to the stadium lots regardless of their arrival time.

Nolan said the new setup means parking prices have been lowered on 75% of the spaces at Gillette Stadium. He added that the free parking program is flexible, meaning that as demand rises, it can expand.

5. As Collins’ role grows, so, too, will his paycheck: Linebacker Jamie Collins‘ return for a second stint with the Patriots is off to a strong start, and if it continues in that direction, he will set himself up for increased earnings. He has incentives in his one-year contract that will pay him $500,000 if he makes the Pro Bowl, $500,000 if he is first-team All-Pro, and then he can earn the following based on playing time:

• What you need to know from every camp »
• Camp preview, roster projections for every team »
• Players who are holding out »

6. Bailey’s work sparks memories of Tupa: I view the odds as higher that rookie Jake Bailey will be the Patriots’ opening day punter over incumbent Ryan Allen, mainly because a team doesn’t trade up in the fifth round without intending to give that player every chance to win the job. On top of that, watching Bailey handle kickoffs in the preseason opener was a reminder of how he could help in more areas than just punting, which sparked thoughts of when Belichick had punter/quarterback Tom Tupa with the Browns (1994-95), and then Tupa came to New England in 1996 under Bill Parcells. The more you can do …

7. Hockenson a mix of Gronk and Mayo: Watching two days of competitive joint practices between the Patriots and Lions last week, my eye was often drawn to tight end T.J. Hockenson, the Lions’ first-round pick out of Iowa (No. 8). His impressive catch radius and reliable hands served up an instant reminder of what the Patriots are missing without tight end Rob Gronkowski, and those in the organization say he’s mature beyond his years, similar to 2008 Patriots first-round pick Jerod Mayo.

8. Did You Know (via ESPN’s Stats & Information): The Patriots totaled nine sacks in Thursday’s preseason opener against the Lions; the last time they amassed that many sacks in a regular-season game was Nov. 4, 2001, in a 24-10 road win against the Atlanta Falcons. The Patriots got to veteran Chris Chandler six times, and then-rookie Michael Vick three times. 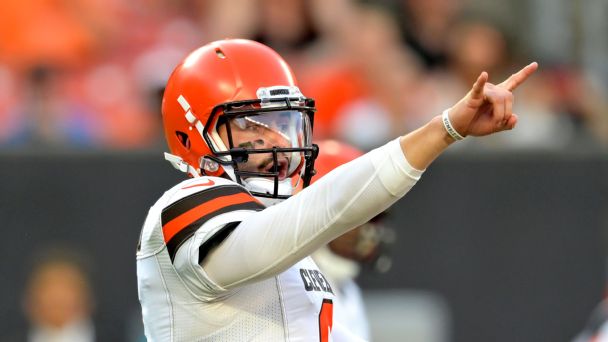 9. Memorable week for Kendricks: Veteran tight end Lance Kendricks didn’t travel with the Patriots for joint practices in Detroit because of an undisclosed injury, but it isn’t something that is expected to keep him out for an extended period. If Kendricks has an extra bounce in his step upon seeing his teammates upon their return to town, it will be understandable. Kendricks’ wife, Danielle, delivered their second child over the past few days.

10. Setting up Titans week: The Patriots are scheduled to travel to Nashville, Tennessee, on Tuesday for a second week of joint practices on the road. The team has never had a preseason under Belichick with two sets of joint practices on the road. Practices are scheduled for Wednesday and Thursday, leading into Saturday night’s preseason game in Tennessee. Belichick pointed out to players last week that they were 3-5 on the road in the regular season, which is an area that could use improvement. That had players stressing the importance of getting into a routine on the road, while also saying they were looking forward to seeing former teammates now in Tennessee, including coach Mike Vrabel, cornerbacks Malcolm Butler and Logan Ryan, defensive tackle Frank Herron, wide receiver Cody Hollister and running back Dion Lewis.