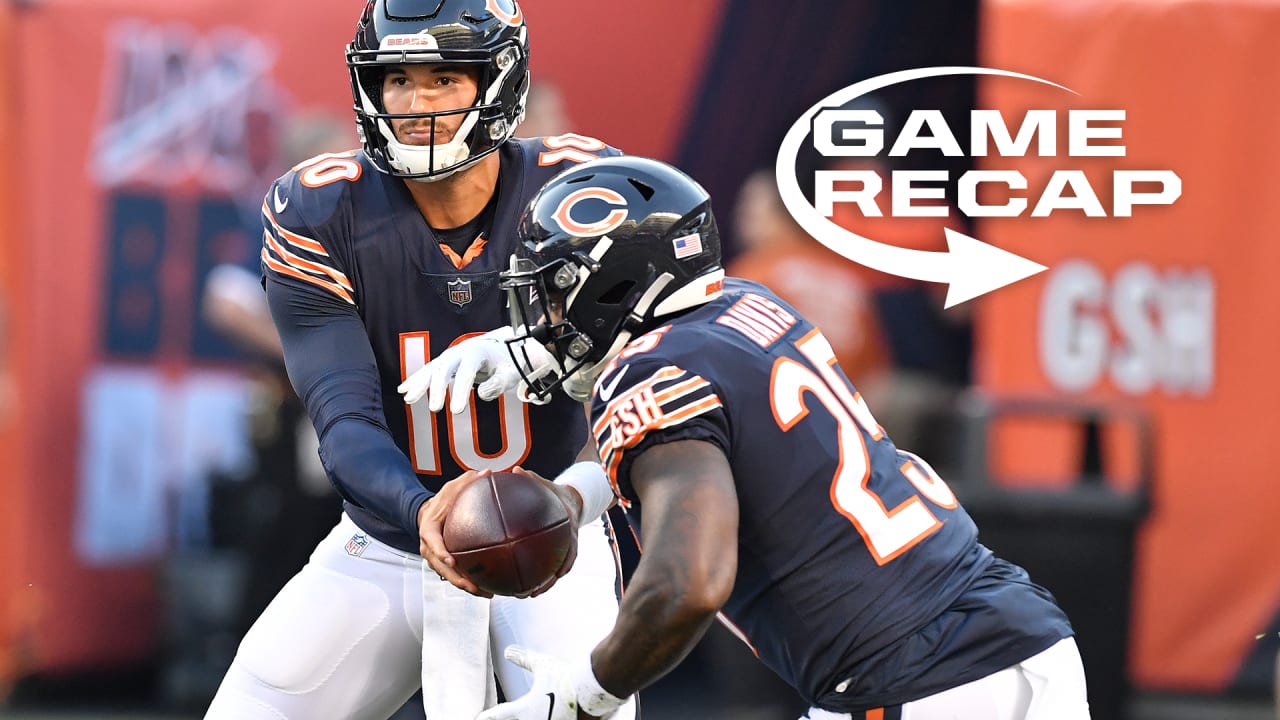 Montgomery gained 23 yards on a screen pass and rushed for a 7-yard touchdown on the same second-quarter drive. Bunting caught three passes for a game-high 77 yards. And Fry made his only two kicks, a 43-yard field goal and an extra point.

After an uneventful first quarter, the Bears defense picked up where it left off last season, generating takeaways on back-to-back Panthers possessions.

Linebacker Josh Woods forced a fumble by running back Elijah Holyfield that linebacker James Vaughters recovered at the Carolina 49.

The Bears capitalized on the turnover, scoring their only touchdown of the game on Montgomery’s nifty run. The third-round draft pick bounced outside to his left, picking up a nice block by rookie guard Alex Bars.

“I just saw open space and I ran to it,” Montgomery said.

“He runs hard,” Nagy said of the Iowa State product. “He runs really, really hard. He runs violent and he’s angry when he runs and he’s tough to bring down with that first defender.”

On Carolina’s next possession, safety Deon Bush intercepted a Will Grier pass that seemingly was thrown right to the Bears safety at the Chicago 48. But Eddy Pineiro missed a 48-yard field-goal attempt wide left, drawing groans from the crowd.

“It’s not fun to miss,” said Pineiro, who made all 12 of his field-goal attempts during last Saturday night’s Family Fest practice at Soldier Field. “You want to make every single kick, but I’m going to learn from it and bounce back next game and hit my kicks. That’s what I’m here for.”

The Bears extended their lead to 10-6 on Fry’s 43-yard field goal as time expired in the first half. The kick was set up by Chase Daniel‘s 45-yard pass to Bunting.

Yes, the field goal attempt was from 43 yards. In the north end zone. After a timeout by the opponent to ice the kicker. Fry may not have exorcised the demons from Cody Parkey’s double-doink late in the Bears’ playoff loss to the Eagles, but the kick drew the thunderous ovation you’d expect from the Soldier Field partisans.

“I did know it was 43 yards,” Fry said. “Obviously that number is ingrained in my memory.”

The Panthers scored on their first two possessions of the second half to take a 16-10 lead. Terry Godwin’s 57-yard punt return set up Grier’s 7-yard touchdown pass to Holyfield. Joey Slye followed with his third field goal of the game without a miss, a 29-yarder, that came after Bears cornerback Michael Joseph had broken up a third-down pass in the end zone.

The Bears later cut the deficit to 16-13 on Pineiro’s 23-yard field goal with 7:07 left in the fourth quarter. The kick came after Tyler Bray‘s third-down pass intended for Bunting was broken up in the end zone.

The Panthers then iced the game on Holyfield’s 11-yard TD run with 1:41 to play.

Four Bears starters opened the game on defense in nose tackle Eddie Goldman, end Bilal Nichols, linebacker Roquan Smith and safety Ha Ha Clinton-Dix. They exited after one series but not until Smith had knifed up the middle to sack quarterback Josh Allen.

“I think it’s really important for a lot of these guys to have the mental side of it,” Nagy said, “the pregame mentality of getting ready for a game, getting out there in the huddle under the lights, and it was only a few snaps and handoffs.

“There were other guys, too, that played the same amount, same thing, preparation, and how do you handle yourself, and it’s always good for everybody to get prepared with that.”