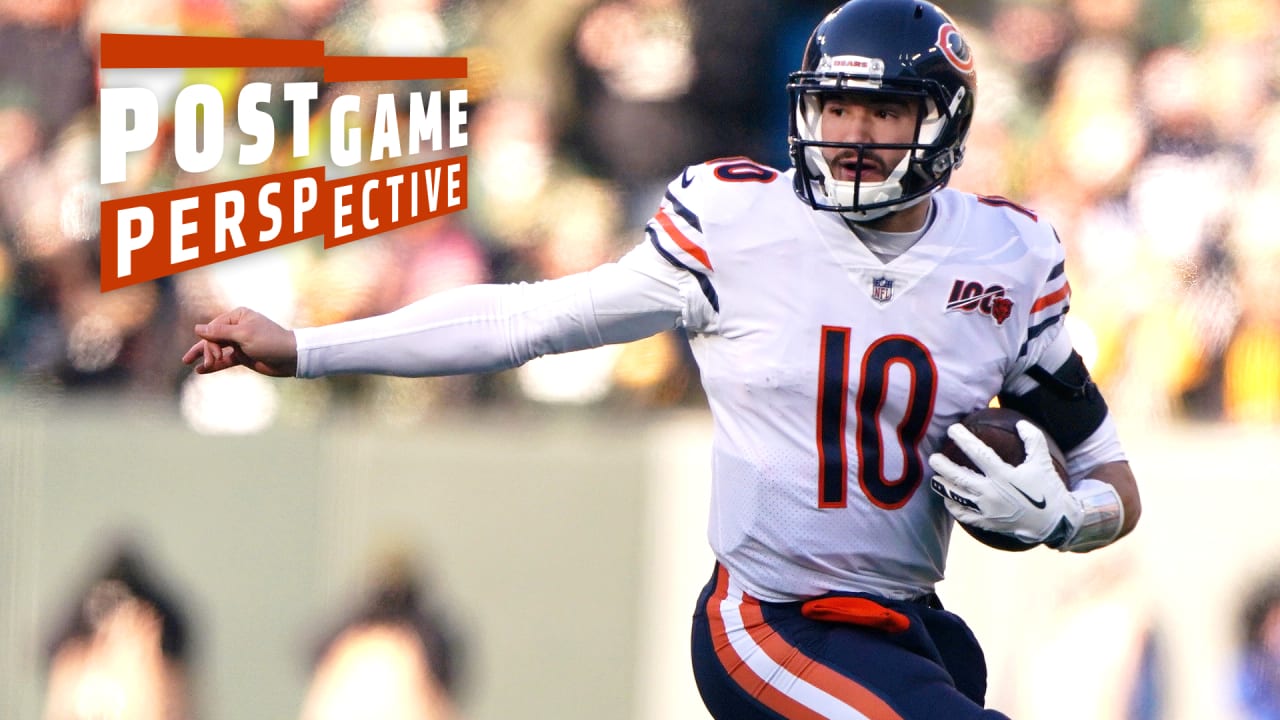 The Packers (11-3) scored touchdowns on their first two possessions of the second half to turn a 7-3 halftime edge into a commanding 21-3 lead. But the Bears (7-7) responded with Eddy Piñeiro‘s 27-yard field goal and Mitchell Trubisky’s 2-yard touchdown pass to Anthony Miller on back-to-back drives, cutting the deficit to 21-13 midway through the fourth quarter.

The defense kept the Bears within striking distance, ending the game with four straight three-and-outs. The unit held the Packers to 11 yards on 12 plays during that span, which included a Nick Kwiatkoski clutch third-down sack of Aaron Rodgers that knocked the Packers out of field-goal range.

The Bears offense, meanwhile, produced 10 points in the first seven minutes of the fourth quarter. The unit generated 190 of its season-high 429 yards in the final 15 minutes but was unable to score on its last three possessions.

“Obviously not the outcome we wanted,” said coach Matt Nagy. “We wanted to come here and play four quarters. I thought that the way our guys fought back there at the end gave us a chance to win is good. But obviously the outcome’s not good. So [we’ve] got to pick up the pieces and get better.”

The Bears almost produced a miracle on the final play of the game but that, too, came up short. With :01 on the clock from the Green Bay 34, Trubisky threw short over the middle to Cohen, who reached the 20 before firing an overhand lateral back to Trubisky, who was trailing the play to the left. Trubisky cut to his right and pitched the ball to Jesper Horsted. It appeared that Horsted could have lateraled at about the 5 to Robinson, who might have scored, but the tight end was tackled and lost a fumble the Packers recovered to preserve their victory.

Sunday’s defeat mirrored the 2019 season for the Bears. They lost four straight to fall to 3-5, but rebounded to win four of five, keeping their playoff hopes alive by improving to 7-6 heading into their clash with the Packers.

Unfortunately for the Bears, their struggles continued against Green Bay; they’ve now lost 17 of the last 20 meetings overall and 10 of the last 12 matchups at Lambeau Field. In losing both games to the Packers this season, the Bears produced just one touchdown on 25 possessions.

“We want to do better,” Nagy said. “You’ve got to be able to score touchdowns; that’s pretty much for us common sense. We want to be better there.”

Trubisky completed 29 of 53 passes for a season-high 348 yards with one touchdown, two interceptions and a 65.6 passer rating. His first pick came on a Hail Mary on the final play of the first half. He also rushed for 29 yards on four carries.

“For the most part, I thought there were times where he used his legs, he extended plays, he made some good throws on the run,” Nagy said. “Then there’s a few that he missed as well. When you throw the ball that many times, that’s normal, that’s going to happen.”

Rodgers completed 16 of 33 passes for 203 yards with one TD and a 78.2 passer rating. It was the first time in 24 career starts against the Bears that the Packers star quarterback failed to connect on at least 50 percent of his passes.

Davante Adams caught seven passes for 103 yards and one TD, while Aaron Jones rushed for 51 yards and two touchdowns on 13 carries.

The Bears defense held the Packers to 292 yards and 12 first downs but didn’t produce enough impact plays. The unit recorded just one sack and failed to generate a takeaway for the second straight game, the fifth time this season and the second time in as many contests against the Packers.

After leading the NFL with 36 takeaways last season, the Bears have produced 16 in 14 games this year.

The Bears return home from Green Bay and face a unique situation; next Sunday night’s home game against the Chiefs will be the first contest they’ve played in two seasons under Nagy after being eliminated from playoff contention.

“It is always disappointing to not meet your expectations,” said defensive tackle Akiem Hicks, who recorded four tackles in his return to action after missing eight games with an elbow injury. “I think for us as a group we have to be able to say that we finish playing the rest of the season that way we played during that streak where we won [four out of five games]; just keep fighting.”